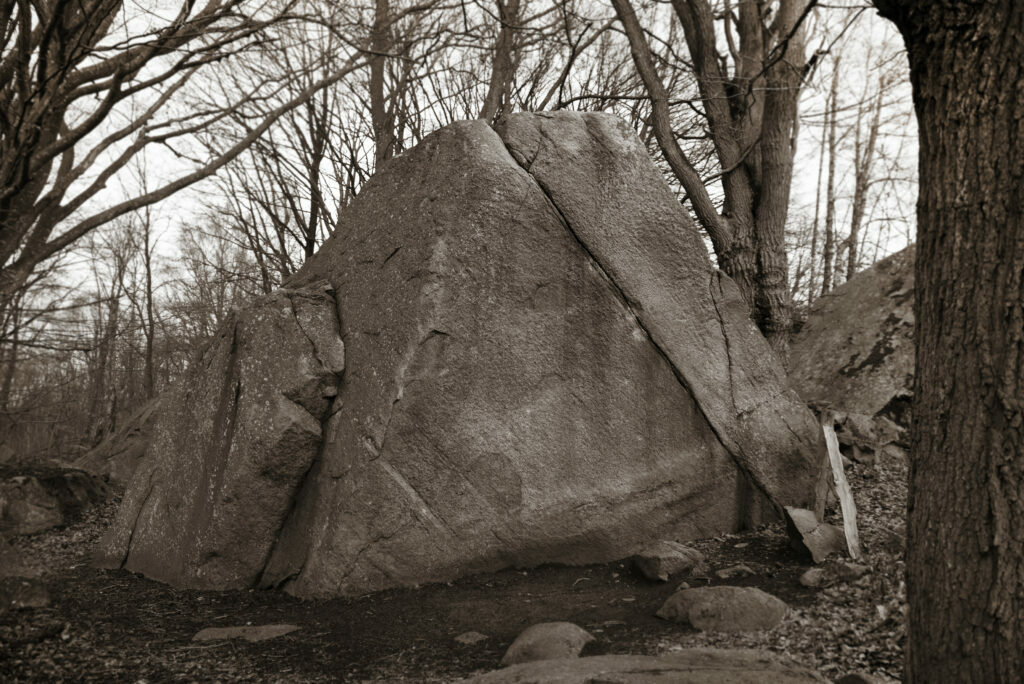 An obvious weakness opens up a thin seam in the solid, sheer rock and enables it to be climbed: MONOLITH.

On the way home from a climbing day at Karlshamn with Patrik Gelin, he suggested to take a stop at a place called Kjugekull. There was supposed to be a great line, that the strong locals had not yet been able to figure out. Said and done, we found ourselves walking among big boulders scattered in a beautiful landscape, as the Swedish summer sun slowly turned red. Bouldering was not even in my vocabulary at the time, but ”Tvärsprickan” (the diagonally crack) as it was referred to, had me allured from the very first sight. A perfect crack that divided the solid stone really yearned to be climbed. The strong fingers of Patrik managed to toprope it (which at this time didn’t seem too strange…) confirming it arguably as the hardest piece of rock in Skåne (county of Southern Sweden). Still, the first free ascent was “up for grabs”.

A year later I had experienced the magic forest of Fontainebleau and was beginning to understand the charm of bouldering; using the formation of the rock rather than relying on holds. The stunning line at Kjuge lit my desire and the next few weekends were spent in the forest, learning the tricks of the trade at Ängen (the Meadow) and Gamla skogen (the Old Forest). Finally, after a ton of hard landings, the project ”Tvärsprickan” was freed. Changing its name might have been questioned.  However, the name of this perfectly located, solitaire, boulder, was already set in my head and the grade was given 7A+.

Malmös own climbing fanzine reported that Kjuges ”last great problem” was freed. Little did the writer know how diametrically wrong he was, as this accomplishment merely should be seen as the start of an explosion of ascents and the development of one of Sweden’s most recognised climbing areas. I’m pleased to have contributed during those pioneering days, when ”instant classics” were born almost every weekend in the forest.